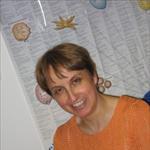 Gabriele Beck-Engeser (she/her/hers) grew up in Germany and attended the Medical Technical College in Esslingen/Germany for her undergraduate degree in Clinical Biology. During undergrad Gabriele became very interested in Immunology and following graduation she joined the laboratory of Dr. Matthias Wabl at the Max Planck Institute Tübingen/Germany working on the mechanism of immunoglobulin heavy-chain class switch.

Since starting her career in Tübingen, Gabriele moved to Hamburg and worked with Dr.Wolfram Ostertag at the Heinrich Pette Institute, University of Hamburg, Germany. Gabriele was involved in the regulation of hematopoietic cell proliferation and in the construction and testing of retroviral vectors for gene transfer into hematopoietic stem and precursor cells.
After Hamburg, Gabriele joined the laboratory of Dr. Hans-Martin Jäck at Loyola University Chicago Medical Center, USA. Gabriele helped Dr. Jäck to establish his laboratory and to start a new project dealing with the mechanisms of early B cell development. This gave her the opportunity to expand her abilities not only to work independently on her own projects, but also to teach graduate students and furthermore to organize the daily operation of Dr.Jäck's laboratory, which included supervising lab technicians, budget management and ordering of supplies.
After Dr. Jäck moved back to Germany Gabriele held a senior research specialist position in the tumor immunology laboratory of Dr. Hans Schreiber at the University of Chicago. Here she was involved in designing inducible vectors applying the cre-lox system and studied the synergy between mutant ras and HPV16 E6/E7 in the development of primary tumors.

In 2006 Gabriele joined again the laboratory of Dr. Matthias Wabl. This time at the University of California, San Francisco (UCSF) studying B lymphocyte differentiation and the mutations that result in lymphomas and later the cause of systemic lupus erythematosus. In her day-to-day work, Gabriele planned and carried out most of the experiments, has been in charge of the mouse colony, oversaw the breeding and typing of the various strains of mice and served as lab manager.
In 2017 Gabriele joined the laboratory of Dr. Peter Hunt in the Department of Medicine, Division of Experimental Medicine, at UCSF. Gabriele performs assays on human cells and tissues including isolation and flow cytometry-based phenotyping of peripheral blood mononuclear cells, cell culture with stimulation and intracellular cytokine staining, cell proliferation assays, as well as ELISA-based plasma assays.

When not in the laboratory, Gabriele supports several outreach programs for homeless people in San Francisco, listens to Jazz and Blues music and is an avid reader.