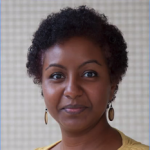 Sara Suliman (she/her/hers) grew up in Saudi Arabia and attended the University of Guelph for her undergraduate degree in Biomedical Sciences. Her first lab job was working on surveillance of trout fish microbial infections with Professor Roselynn Stevenson in the Department of Molecular and Cellular Biology. Fun fact: during undergrad she co-hosted a radio show on CFRU 93.3 fm; the University of Guelph local radio station to broadcast African music once a week. In her final year, her honors thesis focused on the role of insulin in regulating skeletal muscle volume via sodium/potassium ion transporters. Following graduation, she enjoyed a brief stint working in hospitality and catering with the University's hospitality services, which allowed her to attend many weddings and functions on campus.

She then joined the Immunology department as a PhD student, where she studied Notch signaling in T cell development and leukemogenesis under Professor Cynthia Guidos at the University of Toronto and Hospital for Sick Children. During graduate school, she chaired the Campaigns and Social Justice Committee of the Graduate Students Union, where she advocated for funding for post-secondary education, particularly for international students. She started an online Master of Public Health program at the end of her PhD to incorporate experimental lab science with human epidemiology.

After graduate school, Dr. Suliman decided to transition from basic immunology to infectious diseases. Hence, she relocated to Cape Town, South Africa to work initially with Professor Willem Hanekom then Thomas Scriba as a post-doctoral fellow. She worked on the discovery and validation of transcriptional biomarkers of tuberculosis (TB) progression, and clinical trials for TB vaccinology. The role expanded her interest in donor-unrestricted T (DuRT) T cells, which recognize non-peptide antigens, as candidate TB vaccine targets. As a result, she started a second post-doctoral fellowship at the Brigham and Women's Hospital and Harvard Medical school with Professor D. Branch Moody to continue work on DuRT cells, as well as genetic risk factors mediating TB progression. As an assistant professor, she is continuing the theme of studying host factors in TB progression in her role at the division.

Outside the lab, she likes strolling by bodies of water and live music, which we can hopefully safely get back to in the near future.